Ukraine-Russia conflict—what you should know

Global stocks fell last Thursday morning (February 24, 2022) while bonds and oil rose as Russian President Vladimir Putin ordered a military attack on Ukraine, raising tensions in an area that was already on edge. Major European indices (FTSE 100, CAC 40, and DAX) closed down nearly 4% while, as of time of writing, markets in North America recovered nearly 1% from the lows of the day—the S&P 500 Index and S&P/TSX Composite Index were down 1% as of time of writing. The MOEX Russia Index was down approximately 33% on fears of the negative impact of the newly announced sanctions.

Oil, measured by West Texas Intermediate (WTI), initially broke through US$100 a barrel, a level not seen since June 2014, but has since retreated to US$96 a barrel. The flight to safety saw gold add approximately 1%, building on its February gains of roughly 7%. The dollar, measured by the U.S. Dollar Index (DXY), has jumped nearly 1.5% and the U.S. 10-year Treasury yield has fallen six basis points to 1.93.

How did we get here?

The start of 2022 has been exhausting for investors. Global markets are down nearly 10% and the S&P 500 Index recently entered correction territory from the start of the year, as investors have been nervous about a potential policy mistake by the U.S. Federal Reserve and mounting tensions between Russia and Ukraine. Over the past decade, only 2016 and 2020 saw a drop of more than 10% in the S&P 500 in the first quarter. We typically don’t experience weak starts to the year. The most recent turn of events has put additional pressure on markets.

What do we do about it?

In short, nothing. History shows that the impact of geopolitical military activities on markets are short. In 2014, when the Russian Federation annexed Crimea, the S&P 500 Price Index fell nearly 6% leading into the event, only to recover its losses a few months later.

As the chart below illustrates, geopolitical risks dot the landscape of our history. However, investors are rewarded for ignoring the short-term noise. 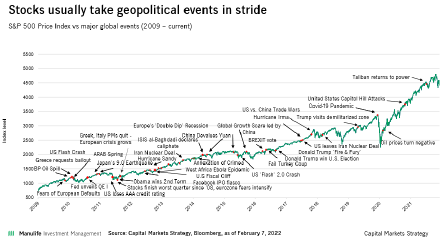 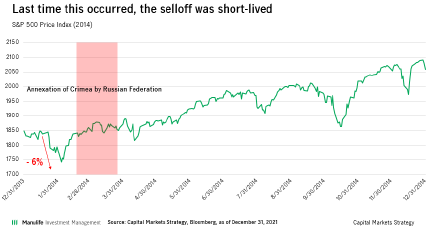 For investors, all eyes should be on the U.S. Federal Reserve

Investors will refocus on central bank policy once the tensions between Russia and Ukraine dissipate or as other market situations arise. Since the start of the year, there has been a shift in market expectations regarding the path of Fed rate hikes. It’s now expected to increase its overnight rate at least six times in 2022, from the expectation of three to start the year. Markets were weak leading into this event on fears of the U.S. Federal Reserve making a policy mistake causing a recession.

Over the past week, the odds of the Fed hiking 50 basis points at their next meeting in March have plummeted, with the markets pricing in only a 25-basis-point increase. The market has recognized that the Fed needs to understand the implications of the Russian-Ukraine conflict on oil prices and global economic activity. The Fed is likely to be more cautious now than what it may have been a week or so ago. As the year progresses, we continue to believe that the Fed will raise interest rates less than what the market expects leading to a pivot in the narrative that unfolded earlier this year. A change toward less hawkish sentiment coupled with a good fundamental backdrop provides a positive path forward for returns.

Oil prices (measured by WTI) have increased approximately 50% since the beginning of December on concerns of a disruption in Russian energy supplies. While oil prices are likely to remain at these levels until tensions decrease, it’s likely a low probability event that Russian energy exports be cut off entirely from global consumers. In a worst-case scenario, oil prices would spike even more, impacting the global economy.

Russia has a strong economic interest in continuing to sell its energy. Its government budget is supported by oil revenue, which makes up nearly 40% of its exports. On the flip side, Europe depends on Russian energy. Germany and Italy’s share of gas supply from Russia is almost 50%, according to the European Union Agency for the Cooperation of Energy Regulators. Both sides lose, increasing the odds of it not happening.

Over the next few months, the geopolitical premium built into oil prices today will likely go away but supply-and-demand dynamics will continue to support oil prices above US$90 a barrel as global economies continue to fully reopen leading into the summer.

Stock markets typically take geopolitical events in stride. History would suggest the geopolitical risk premium built into commodities and the negative market sentiment over the past few months will likely be short term.

As always, if you have any questions about the markets or your investments, we here to talk.

For your safety and convenience, we are doing client meetings by phone, Skype, Zoom, or porch visits. While we may work from home, we have protocols in place to do in-person meetings at our office, with masks, sanitation, and limited people. If you would like a portfolio review or updated financial plan, you can always reach us to schedule an appointment by contacting Terry at terry.wyatt@manulifesecurities.ca and (289) 479-5059 or Diana diana.kancko@manulifesecurities.ca and (289) 479-5512.