It’s time to discard the notion that the shape of a single alphabet—be it the letter “V,” “U,” or “L”—can represent the profile of the coming recovery. Instead, it might be more instructive to think about what lies ahead as a three-stage recovery, each with its own set of key themes, bringing about different kinds of opportunities and risks. 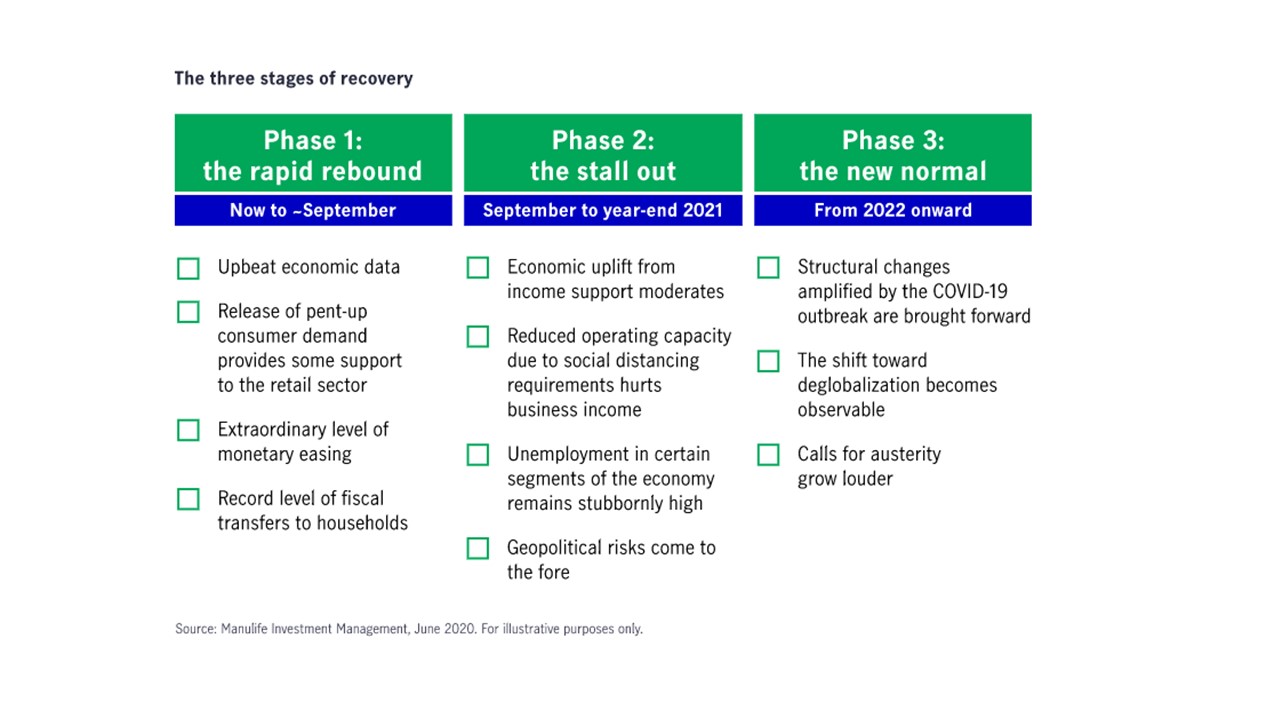 The set of global high frequency data that we’ve been following tells us that the first phase of the recovery began in mid-April. This would explain why we’ve been seeing some rather extraordinarily positive economic data—at least on a week-on-week, month-on-month basis—since May.

During this first phase of recovery, we expect growth to rebound strongly, recouping between 60% to 70% of lost economic output accrued between March and April this year. Essentially, we believe this phase to bear a close resemblance to the kind of economic rebound we typically see when an economy emerges from a natural disaster, as opposed to a traditional recession. Indeed, it’ll initially look like a “V-shape” recovery. Specifically, we expect global manufacturing data to rebound forcefully and expect Purchasing Managers’ Indexes in many countries to return to expansionary territory during the summer months.

In our view, many economists are underestimating the ferocity of this initial V-shaped rebound because the existing macro narrative underappreciates the impact of the fiscal policies that have been implemented, while simultaneously places too much emphasis on challenges that’ll only arrive later in the year. Let’s take household income as an example: In the United States alone, government transfers to households in April came up to around US$3 trillion, significantly higher than the US$1 trillion of lost wages and salaries that was recorded. As a result, U.S. household income actually rose by around US$2 trillion during the period. These federal transfers, along with reasonably resilient consumer confidence about the future, have gone a long way to cushioning the impact of the rising level of unemployment. 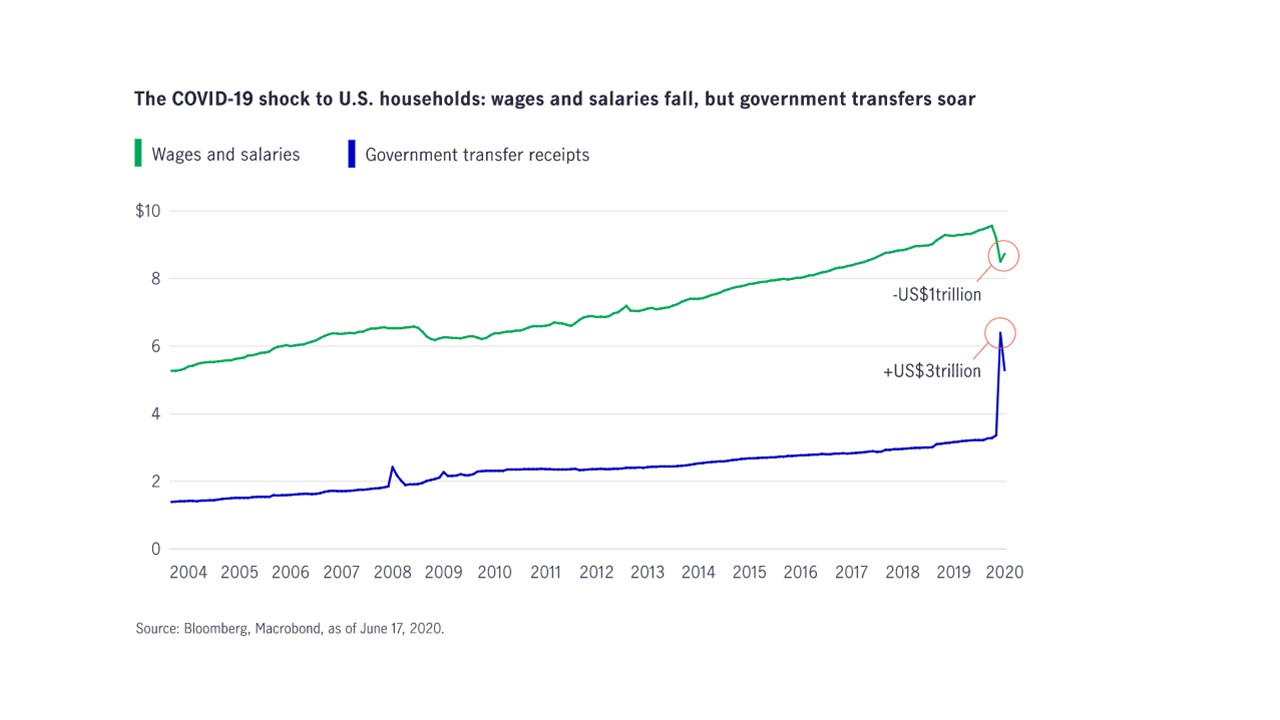 While there’ll inevitably be bumps in the road, we expect the next few months to be predominantly characterized by a risk-on mentality.  As central banks continue to try to actively pin down the front-end of the yield curve, even as inflation and growth expectations rise, it’s likely that yield curves in global developed markets will steepen. Meanwhile, mounting concerns about the growing twin deficits in the United States and a chronic shortage of the U.S. dollar (USD) could keep a lid on dollar strength.

Risks to our views:

Phase 2: the stall out

(August/September through to year-end-2021)

If we were to liken the recovery to a feature length movie, this would be the part where the zippy musical montage ends, and the protagonists begin to uncover the challenges that they must overcome.

As optimistic as we are about the initial economic rebound, we have significant concerns about the second half of 2020, when the stellar month-on-month/quarter-on-quarter improvements begin to fizzle out. Our expectation is that investor focus will shift from accepting improving second-derivative changes as positive news to comparing economic prints to pre-crisis levels.

What’s particularly concerning is that until such time when COVID-19 vaccines are widely available, some form of social distancing measures will be inevitable. This implies that many businesses will experience a sizable reduction in their operating capacity, which can lead to reduced revenue streams, lower manpower requirements, and ultimately, reduced profitability. In our view, corporate defaults could well tick up (again) during this period. Crucially, the risks that seemed to have dissipated during the first phase of the recovery could not only reemerge, but become amplified during this stall-out phase.

This period will also likely mark a waning of fiscal support to both households and businesses, although it’s unclear to what degree these support measures will be withdrawn. Crucially, this is also the period where authorized deferred payments on mortgages and credit cards could come due. This could raise delinquency levels and might necessitate debt write offs that could easily turn into an additional headwind.

Although monetary policy will likely remain extremely accommodative during this time, we expect its ability to revive growth and stimulate the financial markets to wane. In our view, the stall out is likely to be a challenging period for central banks globally because, in all likelihood, this could be the period when they’ll be confronted with weak inflationary pressures and an ugly unemployment picture but have few remaining tools to address them.

Worryingly, we expect unemployment and underemployment, which will likely still remain at elevated levels, to begin to increasingly weigh on U.S. consumer activity, the dominant engine behind U.S. growth. Consensus estimates for U.S. unemployment by the fourth quarter of 2021 are still at 9.5%, almost 6 percentage points higher than pre-COVID-19 levels.¹

Evidence from Asian-Pacific economies, which are several weeks ahead of most Western developed markets in their recovery, suggests that consumer confidence—which has yet to hit a trough—won’t recover as quickly as manufacturing activity. There’s no reason to assume that the experience in the rest of the world will be any different.

Lest we forget, the U.S. presidential election—a key risk event for the markets—is scheduled to take place during this recovery phase. Regardless of its outcome, we expect U.S.-China trade tensions to worsen over the medium term. This is likely to exert pressure on broad risk assets as well as the emerging-market complex. In addition, concerns related to Brexit and EU solidarity are also likely to come to the fore around this time, exacerbating the discomfort that investors are likely to experience during the stall-out period.

This period is likely to be defined by a massive amount of market uncertainty, which could, in turn, suggest that there may be a greater emphasis on quality assets. In our view, broad risk markets are likely to remain rangebound or suffer declines. A slight improvement in the inflation picture—although admittedly weak—and bloated central bank balance sheets could set the stage for gold to do well during this period. In our view, the U.S. yield curve will continue to steepen during the stall out, although at a more moderate pace than during the first phase of the recovery.

Risks to our views:

Deglobalization, potential changes to tax structures, and a frantic search for yield

In the last few months, there’s certainly been no shortage of commentary on likely structural changes to the global economy in a post-COVID-19 world. In our view, the coronavirus outbreak mainly acted as an accelerant on developments that were already taking place, and there are three themes in particular that we believe warrant investor attention.

During this stage of the recovery, we expect broad USD weakness to persist, although to a lesser extent than the U.S. twin deficits alone would suggest—a chronic shortage of USD in the global financial system will likely keep a floor under the currency.² In our view, excessively low interest rates could enhance equities’ appeal to investors, even if on a relative basis. Meanwhile, international equities could perform better than their U.S. peers assuming the historical inverse correlation between USD strength and the asset class remains unchanged. Within the credit space, a renewed search for yield could make high-yield assets and emerging-market debt more attractive to investors.

Risks to our views

While not part of our base case, there are several risks that could darken the global economic outlook:

That said, there are also upside risks in the longer term that investors should be mindful of. Should governments worldwide choose to ramp up fiscal spending through initiatives that are appropriately targeted at productivity-enhancing investments successful implementation could boost productivity and therefore growth, supporting broad risk markets and a sustainable, longer-term recovery.

The COVID-19 outbreak has brought unprecedented uncertainty and confusion to the financial markets. From an economic perspective, decisive policy action has so far helped to avert a global financial crisis—an achievement in itself. Crucially, the first phase of the recovery has, in our view, bought us a little time to reevaluate the way we think about risks and rewards, giving us an opportunity to identify the most appropriate way to navigate the next two phases of the recovery which will be, in all likelihood, a little bumpier.

Click here to see original publishing of this article

1 Bloomberg, as of June 18, 2020. 2 For more background on U.S. dollar shortage in the global financial system, please refer to “This Is the One Thing That Might Save the World From Financial Collapse,” New York Times, March 20, 2020.